Dreams are only nice as long as they are unreachable.

“Why do I always fall in love with the wrong guy?” 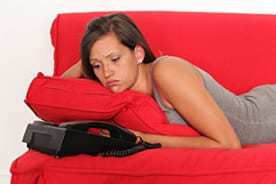 It’s a recurring sigh of desperation that I keep hearing in my therapy sessions. Usually it comes from women although there are also male love addicts out there.

The script is always the same. She meets an interesting guy. After the first date or a passionate night he’s gone with the wind.

Women get very imaginative when the question of “Why doesn’t he call me“ comes up. Excuses go from he lost the phone number, is tangled up in a work overload, has family commitments to all sorts of other ideas. Quite often these excuses do not correspond with reality though. Usually it’s the beginning of an unconscious relationship in the merry-go-round between two people with relationship deficits. Julia Kathan describes this very well in her book „All that for a little bit of love?“ which I am following to a large extent.

The “wrong partner” is the married family man with two children who can’t make up his mind who he wants. Or the marketing manager, who is incapable of keeping a relationship, but doesn’t mind a hot affair, since he’s not interested in a serious relationship and has been hurt too many times before.

How the drama commences.

Maybe it’s the unemployed alcoholic who has just quit his therapy or the unique artist who needs financial support for his first art exhibition. With her instinctive radar the female love addict localizes exactly the kind of guy who suffers from an inveterate responsibility allergy and who shys away from any intensive relationship.

All these men have one thing in common – after their initial strong interest for the woman’s body and mind the contact becomes very one-sided bit by bit. HE either doesn’t call back at all or much later than expected. There are all kinds of reasons why meeting each other is –sadly enough – not possible.

Instead of becoming suspicious and thinking „He’s just not that into me after all“, backing off and waiting, she does something else. She fills the silence with hours of pondering what’s wrong with him, why he’s not calling, what she did wrong, how she could have done it right… and starts to conquer the relationship-shy guy. She compensates his retreat with countless phone calls or text messages that are supposed to show him how important HE has become in her life.

Unluckily this does not lead to the desired result. On the contrary: the guy feels sieged, only takes up contact sporadically with many tergiversations at hand and retreats even more to his castle. This of course leads to increased leaguer activities on her behalf. It’s a classic vicious circle.

The particularity of these constellations is: these women are no wallflowers, who are scared of never ending up with a guy by their side. Normally they’re strong, attractive women who are successful in their professional life and who sometimes raise kids on their own in addition – but they suffer from a barrel of minority complexes.

That’s why well-meant questions from friends like „Are you really desperately in the need of running after such an idiot?“ remain unheard. The answer is “Obviously she needs just that.” But why?

1. Severe self-esteem issues
Love addicts are overly critical with themselves, depreciate themselves and don’t love themselves a lot. That’s why they search for acknowledgement and recognition from others. In this case they search for it with him. But since others often reflect what’s inside of us with their behavior, the hesitant guy amplifies the feeling of worthlessness.

The source of low self-esteem can often be found in a lack of security during childhood or youth. Early negative and hurtful relationship experiences a child makes through not enough love and rejection, abuse, beatings or emotional negligence shapes the relationship map of a love addict.

Since children cannot prescind from things very well, they believe these kinds of experiences are their fault. They develop a conviction that says they’re not worth anything; they’re needless or even a burden.

Already as young children such people take over responsibility, take care of others and try to get at least some attention by performing extremely well. Own desires have to be denied or suppressed. In the love addict’s relationship these old relationship patterns are reactivated.

2. Fear of being abandoned
Female love addicts often feel empty inside when they’re left alone and are by themselves. The partner is supposed to fill that emptiness, and he does to some extent, but his retreat quickly confronts the woman with that threatening feeling of emptiness.

Fear of loss often has its source in childhood. Parents who have separated, a long stay at the hospital or in an orphanage, the death of a parent are old wounds that are sometimes not scarred. If the woman is afraid to be abandoned, the old existential fears of the child are often broken open. 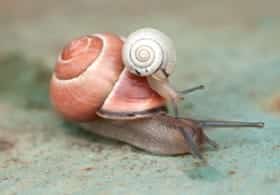 Instead of reacting skeptically and waiting to see what happens when a man backs off, the female love addict becomes fearful that HE might leave her. Thus she turns on the whole control program as Julia Kathan describes in detail in her book:

Besides, love addicted people are very loyal and rate fidelity very high. A necessary separation is really hard on them because they feel the pain and the desperation of the other person beforehand and therefore try to avoid it.

3. Desire to bond and fear of being close.
This may sound absurd at first since the female love addict does a lot to bond. But of all men she will choose the one man where she can subconsciouslybe sure, that he will step on the relationship brake early enough.

The logic that lies behind this: strong yearning is easier to bear as long as fulfillment is not a threat.

In other words: a love addict can safely search for closeness and bonding, if he or she can count on the other person to create the necessary distance by retraction.

Love addicts also consider a relationship to be the most precious thing on earth and are ready to do everything to keep the connection going. But this relationship triggers off ambivalent feelings. The bliss of being together is overshadowed by the fear of being abandoned and then leads to typical behavior of leeching onto the other person. The desired reactions on HIS behalf (that don’t take place) trigger the experienced separations and the connected mortal fear.

So how can we tell the difference between a strong love and being a love addict?

I am mainly addressing female love addicts. Men too, have these problems but they’re much more unusual.

Here are 10 symptoms of love addiction.

What can you do?

If I trust my experience then love addictive behavior is – just like any other addiction – not that easy to change. Because very hurtful emotions from then and now are connected with them. But it’s possible. Some will probably fail in trying to change their behavior. Maybe professional support via therapy can be helpful.

Here are some first steps: 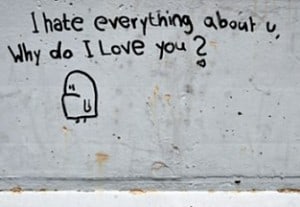 The core of love addiction is low self-esteem. That’s why it’s so hard for you to back off from the relationship when the right time has come.

Think about it for a moment – where else can you get recognition and appreciation other than from that relationship? At work, from friends – and especially from yourself. Julia Kathan’s book has many helpful suggestions for you.

Set a tight time limit for him to make his decision.
The biggest mistake of love addicts is that they postpone necessary consequences or don’t take any at all out of dreading the end of the relationship. Indirectly that’s basically the permission though for the other person to continue treating you the way he is.

In “All that for a little bit of love” the author wisely says:

A married man who hasn’t made a decision between you and his wife within 6 months doesn’t know what he wants.
Or in other words: he knows exactly what he wants.
Everything should stay the way it is.

Clarify whether you may have a depression.
Because many of the above described attitudes and behavioral patterns are also typical for a depressive dysfunction: difficulty in getting angry, extreme need for love, a high level of readiness to help and sacrifice yourself and low self-esteem.

A depression has to be treated. Very rarely does it go away on its own. If it does, it may come back when you find yourself in your next crisis.

Stop wanting to change him.
You cannot change others. They can only change themselves. Stop circulating around him like a planet making him the center – put yourself in the center of attention of your own life.

When you can think clearly, make a checklist of how you can recognize a guy who is not into wanting a serious relationship and what type of man you’re attracted to. Should you encounter one of them in the future, go through your checklist – and keep at a safe distance – especially when he doesn’t treat you nicely.

You cannot recognize what you are not aware of.
Many women concerned believe that they’re just unfortunate in love – and that someday everything will fall into place and they will be together with the beloved partner. Wake up! Don’t mix up waiting for an eternity with passionate love.

This misbelief is part of the problem. Many women don’t realize that they’re love addicts or how hopeless the relationship is. Plus they don’t understand that the lack of love and appreciation for themselves is keeping the problem alive.

One thing I want to tell you men out there though.
Female love addicts often hook up with a “mama’s boy”. That means a man who wasn’t able to leave the female sphere and grow into a man’s world. It’s the kind of guy who goes through life as a nice boy, Casanova, hero or mafia boss.

The “mama’s boy“ isn’t aware of his problem and therefore hooks up with a love addicted “daddy’s little girl“ who is irresistible to him at first, but who turns out to b a controlling, clutching mother figure.

Both partners have to work on their detachment from their internalized parents. I wrote a whole book about it which will come on the German market in August in paperback. It’s called:”Women want grown-up men.”

How do you Think about love addiction?