Letting things go does not mean to get rid of them.
Letting them go means to let them.

Letting go: it’s so hard for us sometimes – but there are ways …

veryone knows the feeling when you hold on to something that lies in the past or has been lost. I’m not talking about bittersweet memories of moments long gone or keeping something to commemorate something that is important to us.

I mean situations where we hold on helplessly or desperately cling to bygones although we feel that they cause nothing but sorrow – and somehow we don’t seem to have any influence on this act of holding on.

Friends, who wish us well, and other advisors tell us to finally let go. To make amends with the fact that some things will never change and others are over. But we already know that.

WHY DO WE NOT SUCCEED IN LETTING GO?

The answer is simple: because we’re holding on. Most of the time not consciously, since we are frantically trying to let go of the hurt and the pain. Yet here we are confronted with our mind turning the same thoughts over and over again, the inner holding on.

Tie a coconut to a tree, hollow it and put some rice in it. The hole in the coconut should just be large enough for a monkey to put its hand in it. The monkey will grasp the rice but meanwhile its hand has gotten so big, that it can’t pull it out anymore. But it wants to hold on to the rice no matter what and thus is captured.

Indian instructions on how to trap a monkey

What we need to realize is: We subconsciously hold on to something, because we fear something would happen, if we were to take the risk of letting go.

Identify that fear. That may not be easy because you will find all sorts of reasons why you needn’t be afraid of anything.

Here’s a well-proven method of how you can begin with letting go.

You cannot force yourself to let something go. And when you let something go you have to give something away. Yet it’s often not what you think you’ve lost. You need to let go the reason for your holding on. But in order to do that you have to recognize what that particular reason is.

Which fears can block the process of letting go?

When we hold on to something that is eternally lost, then there is almost always a good reason with which we want to safeguard something inside of us.

It’s all about finding this particular reason.

A freelancer once told me during a therapy session, that he went bankrupt fifteen years ago and since then has been caught up in an undesired, low paid job as an employee. He said that he has good ideas to open up a new business but as soon he preoccupies his mind with the thought he immediately loses his courage because the image of the bankruptcy appears before his mind’s eye.

He followed my idea of writing all this down and during that process he got closer to the deeper meaning of his holding on. He believed,
– that having gone bankrupt once showed that he was incapable of working as a self-employed man,
– that he had had his chance in life and that now it was time to be modest,
–  that it wasn’t a good idea to tempt fate again since punishment might come his way,
– that his parents, who had always warned him about self-employment, were right after all,
– that he had enough to live on and that more money wouldn’t make him any happier either.

After having written down all these reasons that were totally unknown to him, he was able to judge them from a distance. He remarked that they all had some sort of punishing quality and that reminded him of his strict Catholic upbringing. As he gained clarity on the background of his holding on, he was enabled to look upon his fears more rationally and could classify them as inappropriate.

A half year later he went into business for himself with a brand new idea.

Our holding on to meaningless thoughts, exaggerated fears, undesired experiences has a function, a deeper meaning. Mostly we try to keep a fear in check or don’t want to accept a painful truth.

Here are some examples from my personality seminars or coaching sessions:

Letting go means to accept something.

In order to finally let go of past grievances, old injuries, faded love, failed trials you usually have to learn to accept something. The refusal to accept leads to holding on which shows itself through endless pondering or agonizing, recurring same old thoughts.

When you’ve spotted the reason for your holding on, the meaning that you’ve given the matter until now by having written everything down as described earlier, then you will probably also find the key of how you can let it all go.

From my experience with many people over the decades the price is that they have to learn to accept something. In most cases these are the things concerned: 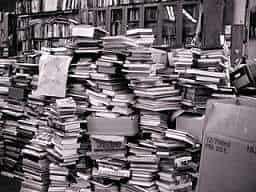 Sometimes we need to accept that before the big profit comes our way there is relinquishment. If we really want to change something, then we need to give something else away. That this can be pretty tough is something I am quite aware of – – I gave away part of my cherished book collection – one thousand (!) in numbers.

But holding on sometimes seems to be easier than letting go.

What experiences have you gone trough on the topic of letting go?