Mom, is it true, that in some parts of Africa women do not know their husbands before the marriage?”
“This is the case in every country, child”

Why many men stumble over the umbilical cord in their relationships.

e all are born with an umbilical cord. It is made of human tissue, of  pink color and measures about 20 inches. Immediately after birth it is cut through by the father or the doctor, depending on the parents’ belief.

This happens, because the infant now no longer needs to be supplied through his mother’s metabolism. This surgical cut also represents an important ritual. Mother and child now are two distinct people. This concerns the real, visible umbilical cord.

But each of us still has a second umbilical cord.

For, of course, the infant, even after the umbilical cord has been cut, is totally dependent on the mother or another constant caring person. This dependency, which, with regard to humans, lasts longer than with any other creature – after all at least 20 years – stamps our relationship experiences. Humans learn from childhood on, that they are social creatures.

Yet, beside this vital dependence, children have a strong need: They want to become autonomous, grow, explore the world. As soon as a small child has learned to crawl, he will no longer rest on his seat. He explores the world. – often at an incredible speed.

The balance between these two needs, between dependency and autonomy, will stay for the whole life. The initial symbiosis between mother and child is loosened by further separation steps. Weaning, sleeping in his own bed, the first morning spent alone in playschool without the mother, are further stages of the child’s detachment from the mother. And most of the time, such a transition from one phase to the next is accompanied by fears, on the part of the child just like of the mother.

And each time, in addition to the joy about more personal freedom, it also entails some pain. The three-year girl only stays in the playschool, as long as her mom sits beside her. The mother gets up five times a night, to find out, whether the child, now sleeping in his own bed, is still breathing.

The cutting through of the first, the physical umbilical cord, is reasonable for the parents, completely free of pain for both, mother and child – and takes only a minute.

The cutting through of the second, mental umbilical cord, is not always that comprehensible for the parties engaged. Most of the times it is also painful for all – and mostly it takes many years. Some seem not to be able to cope for their entire life.

In the men’s department of a store a tall, well-dressed man in his middle years attracts my attention. Judging by his behaviour, he could be a manager. He rummages through the shirts displayed on the shelf and after some time selects two of them.

At the same time an elderly woman approaches him from behind, saying in a rather sharp tone: “Put those back again. I‘ve already chosen two for you!”

The man puts back his shirts and follows his mother to the cash desk without saying a word.

Sons seem to have more difficulties to detach themselves from their mothers than daughters do. This can mainly be seen in two areas of life. On the one hand in the lack of detachment from the real mother like in the examples mentioned above, on the other hand within marriage or in a relationship:

A man starts secretly, within six months after the birth of the together planned child, a passionate affair. He perceives his wife with her demand for support and care as more and more controlling.

When he is with his lover, he feels totally free. After a year the lover becomes pregnant and the man, immediately after having been told, ends the relationship in order to concentrate on  his initial family.

Has a man not yet found his balance between dependency and autonomy, an otherwise self-confident, active man, in certain situations, can mutate into:

● an offended teenager, who defies simple requests like »Why do you never clear away your things«, protesting loudly.

● a man, who, when being asked a simple question like “What do you think about getting married?” is capable of developing the sabotaging creativity of an eight-year-old – and answers “Not now, later!«

What is going on in this man, in these moments?

From my point of view, he is stumbling over the second umbilical cord in these situations. Of course, the man’s perception is rather different, and he will find a number of rationalizations for his answer, which, however only scarcely will persuade or satisfy his partner. 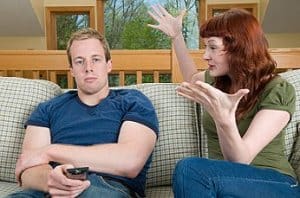 If she now asks for example “Why not?” this rarely will result in a revealing talk, but rather the man will murmur “Don’t know, it’s just the way it is”, switch on the TV or leave the room for the basement to read the electricity meter.

But back to the question, what is going on inside him in these moments. To ask him himself, usually is to no avail, for he does not know. He really does not know, that is for the psychology experts among us:  it is unconscious to him.

What is the “umbilical cord drama”?

In my own experience – and from the encounters with men at numerous seminars and coachings – many men in such situations go through the “umbilical cord drama”. According to it, the question “Why do you never put away your things?”, triggers about  the following deliberations:

He does not feel like cleaning up and he cannot see the necessity for it. At the same time, it is difficult for him, to tell his wife/girlfriend, as he thinks, she is not going to like it.  And hey presto, he finds himself in a seemingly irresolvable dilemma, which feels something like this:

But that’s quite simple, you may now be saying, in the case you are a woman. Then we’ll have to talk! Everybody tells his wishes and why they are so important to him or how he feels, and then we’ll be looking for a common solution, which will satisfy us both.

You’re definitely right, that’s how it could work between two adults. Men do the same. In the job in important negotiations, on a bike ride with other men. Just in situations, where they feel free inside.

But in his private life, often his second umbilical cord gets in his way. It wraps itself imperceptibly around his neck like a wicked snake, cruelly and slooooowly choking him, till the blood circulation in his brain becomes increasingly restricted.

His capability of thinking decreases and towards the end the victim only can stammer helplessly: “Oh, leave me alone!”

That is how the “umbilical cord drama” can be imagined. Only this way it can be better understood, that some men, who manage accounts worth millions of Euros or can handle a tram, do not answer their partner’s harmless question “How about asking Mullers round for Saturday night?” with a definite yes or no, but tend to react the following way

● “Can’t we decide about it tomorrow?”

This ist the introduction of my first book “Women want grown-up men”
Why men have to detach themselves, in order to be able to love. It will be soon published as a Kindle eBook at Amazon. Write me an eMail and you get notified.

Do you have experience with not grown-up men??